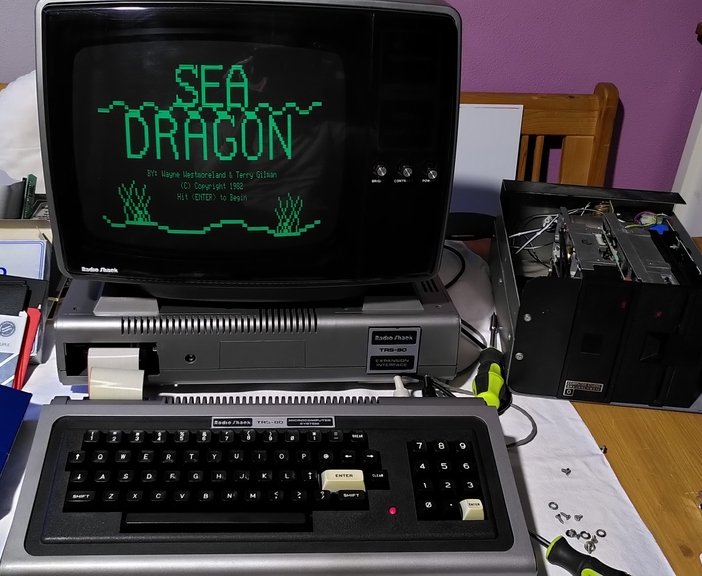 At the beginning, however, we had a somewhat bumpy start – but more on that later.

Tandy … what? Such a question you only hear in Germany. Yes, indeed, the computers of the company Tandy Radio Shack were less common in Germany and are therefore hardly known today. In contrast, every child in this country knows Apple and Commodore. However, the TRS-80 Model I belongs to the so-called “1977 Trinity”, as byte Magazine called it. At that time, three manufacturers launched the first home computer for the mass market in the USA at relatively the same time: Apple with the Apple II is certainly the most famous representative, Commodore brought out the PET 2001 and Tandy put a cheaper alternative on the market, the TRS-80 (TRS stands for Tandy Radio Shack and the number 80 points to the Z80 CPU).

By the way, 1977 was the year when NASA’s Voyager 1 and 2 sondes were launched into space. The goal for Voyager 1 was to fly past Jupiter and Saturn to gain important scientific knowledge. This goal was successfully achieved in 1980. Since then, the sondes has continued to fly and in 2012 became the first human-made object to reach interstellar space, leaving our solar system. Voyager 1 is now an unimaginable 22 billion kilometers from Earth and still sending data to Earth … mind you, with computer technology from the 1970s!

Tandy Radio Shack (today just Radio Shack) is a traditional American electronics retail company, roughly comparable to MediaMarkt in Germany, which has always launched products under its own brand name. Due to the boom of so-called home computers in America in the mid/late 1970s, the Texan company Tandy Radio Shack decided to launch such a computer on the market and sell it in its own stores. In addition, there was the advantage that Tandy already had its own production facilities in Texas. Since the TRS-80 was cheaper than the competition and could also be sold through the close-meshed U.S. store network, the TRS-80 quickly became a success. At the time, Tandy itself described its entry into computer manufacturing as “probably the most important product we’ve ever built in a company factory” , source: https://en.wikipedia.org/wiki/TRS-80.

In its basic configuration, the TRS-80 had a Z80 CPU with 1.78 MHz, Level I BASIC and 4kB RAM (internally upgradeable to 16 kB RAM). It was offered at launch complete with a small green monitor and a cassette recorder for data storage for $599.95 (source: Tandy Radio Shack Online Catalog Archive: https://www.radioshackcatalogs.com/flipbook/c1977_rsc-01.html). In contrast, the Apple II already cost $1,298 in the basic configuration with 4 kB RAM without monitor. Because Commodore was struggling with delivery problems at the time, while Tandy had the computers in the stores just in time for the Christmas business in November ’77, the Texans were able to grab a good market share with their first computer.

The Model I combined the motherboard and keyboard in one case, as was common in the 8-bit era. However, the case is much more compact than that of the PET and Apple II. The latter, however, had additional space for expansion cards in the same case. The compact case of the TRS-80 was also possible because the keyboard was placed upside down on the mainboard with spacer sleeves. By the way: The VIC20 and C64 (breadbox) from Commodore, which came on the market years later, look very much like the TRS-80.

To make up for the lack of expansion capabilities, Tandy provided an additional box, called the “Expansion Interface”, which connected to the TRS via a ribbon cable. It expanded the computer with a parallel Centronics interface, connectors for up to 4 floppy drives (via a daisy-chain cable) and additional cassette recorder connectors. Optionally, the E/I could be expanded by up to 32 kB of RAM and provided an RS-232 serial port, which was provided via an optional daughter board. The expansion unit required its own power input via a separate power supply. However, the case is designed to accommodate both external power supplies – that from the TRS-80 and from the E/I – in the expansion unit. As described above, only the E/I provides a parallel port for connecting a printer. That means, if you wanted to work reasonably with the system, you couldn’t get around the E/I anyway. Unfortunately, the expansion unit is also a reason for the nickname “Trash-80”, because the unshielded ribbon cable let the box crash frequently. Besides that, the TRS-80 had some other stability problems, at least in the early years.

The first release of the Model I was delivered with a Level 1 named 4 kB small ROM BIOS/BASIC from which the computer started. By the way, booting from the integrated ROM chip was common for microcomputers at that time due to the lack of a hard disk, because they were prohibitively expensive and even a floppy drive was not part of the basic equipment. To squeeze a BASIC into 4 kB ROM was quite a challenge and led to the fact that e.g. floating point operations could only be performed with single precision. Furthermore, there were only two string variables (A$ and B$), 26 numeric variables (A-Z) and one array variable. Minimalistic also the error messages, of which there were altogether only three: “WHAT?” for syntax error, “HOW?” for arithmetic errors, like e.g. division by zero and “SORRY” for Out of Memory. Level 1 Basic, according to Tandy, was designed to help people who had never been exposed to computers before shy away from them by introducing them to an easy-to-learn programming language. The accompanying documentation for Level 1 Basic was also aimed at this target group, with examples and cartoons that made it easy for everyone to understand. You have to keep in mind: We are talking about the year 1977!

The BASIC restrictions were then lifted with Level II, which appeared in 1978. Tandy himself always saw Level I BASIC only as an interim solution and advertised the new version already in his first brochure as “coming soon”. Level II BASIC was licensed by Microsoft, now occupied 12 kB ROM and was also required for the operation of the expansion unit with floppy drive. For existing systems there were upgrade kits, where the ROM chips were exchanged (Overview of upgrade and expansion kits: http://www.trs-80.com/wordpress/trs-80-computer-line/model-i/)

My own Model I

This finally brings me to my TRS-80: It already has the Level 2 BASIC and has 16 kB RAM on board. In addition, my Model I Level II also has a separate numeric keypad on the keyboard – also a result of the model upgrade. Originally, all TRS-80s were produced in the own and only Tandy factory in Texas. When the Model III was added in the following years, the production of the Model I had to be outsourced. The company TEC (Tokyo Electric Company) in Japan could be won for this purpose. The outsourcing freed up the necessary capacity in Texas to produce the Model III. The Japanese used this opportunity to rework the board layout of the Model I and optimize it. The mainboard now also carries the name “TEC” and is thus easily recognizable as a “Japan version”. Also the Catalog No. is now 26-1006A. This board version is generally considered to be very stable and anyone who gets hold of such a model can consider himself lucky.

In conjunction with the Japan version apparently a curiosity happened, which I read in the trs8bit magazine, which can be read there from page 71 http://www.fabsitesuk.com/tandy/trs8bit_year10.pdf and which I do not want to withhold from you: Because of the missing shielding of the TRS-80 Model I, the devices were not radio interference suppressed. That caused the American authority FCC to impose a sales stop starting from 1981 for the Model I in the USA. Unfortunately, the Japanese were supposedly forgotten to be informed about this, which led to the fact that they continued to produce the Model I. However, since they were no longer allowed to sell them on the American market, it was decided to offer them worldwide and, among others, increasingly in Europe. Therefore, the Japanese version with English character set was also available more frequently in Europe.

Via detours and with a 40-year delay, such a Model I has finally landed on my desk – complete with expansion interface, green monitor and external 5.25″ double floppy. That makes me quite proud! Unfortunately, the joy was dampened right after the first switch-on, because the screen was only covered with “@9” characters and didn’t accept any keystrokes. Well, what can you expect with such old hardware? At least the screen worked and the TRS-80 got power. Fortunately I found some help at the Verein zum Erhalt für klassische Computer e.V. (https://www.classic-computing.org/) for active and competent support. After the remote diagnosis was not successful, one of the members took care of the two mainboards and was able to bring the computer back to life. You can read the whole story in the forum: https://forum.classic-computing.de/forum/index.php?thread/23634-trs-80-model-1-japan-version-26-1006a-zeigt-nur-noch-9/

So now, with a few weeks delay (but what does that matter after 40 years), the Tandy TRS-80 Model 1 Level II adventure can finally begin.

I will continue to report on my experience.