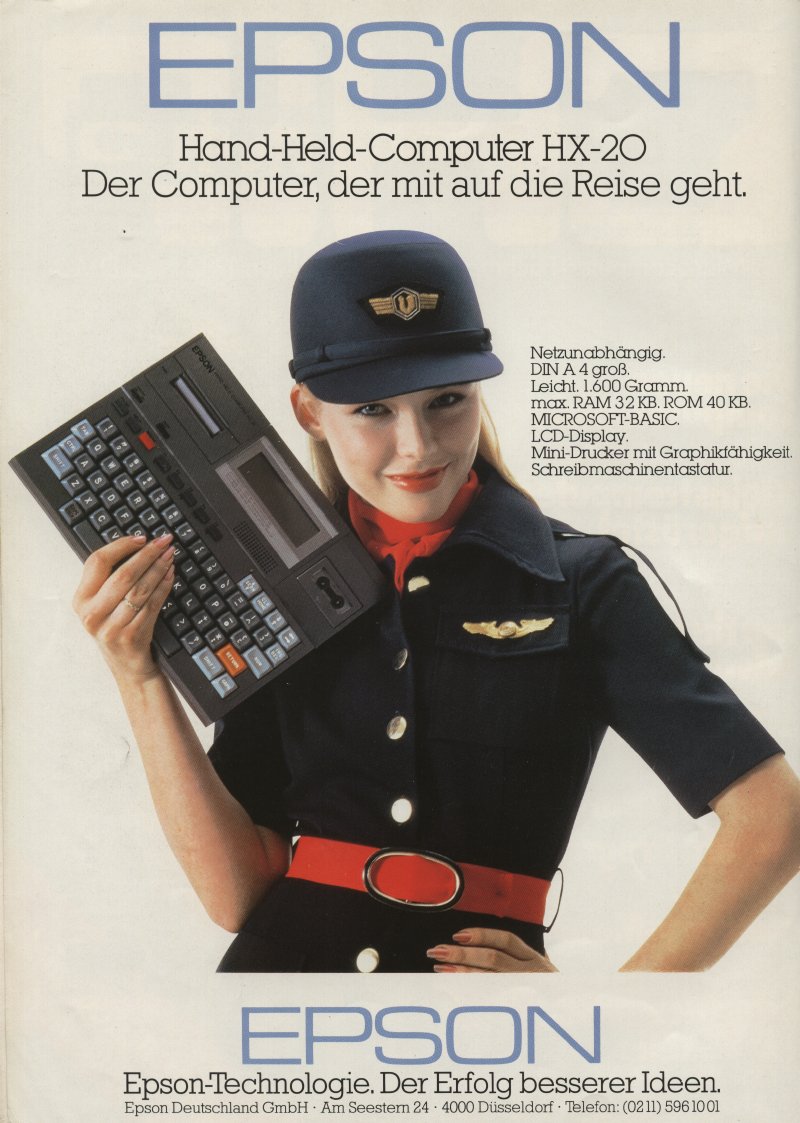 The EPSON HX-20 was the first “true” laptop to hit the market in the early 1980s. With its dimensions of the size of a DIN A4 sheet and the built-in rechargeable battery, it was revolutionary at the time. It was easy to carry in any briefcase and could run for many hours without an external power supply.

With its built-in micro-cassette drive and 9-pin cash-register-roll printer, the EPSON HX-20 was a fully equipped office computer. In addition, it had a decent typewriter keyboard with “full-size” keys, with which you could write for a long time without fatigue. At the time when the HX-20 came on the market, there were no high-resolution computer graphics and certainly no high-resolution LC displays. Thus, the built-in 4-line (4×20 characters) LC display was quite appropriate for the time and sufficient for the daily work at that time. Nevertheless, it could display graphics in b/w. The built-in BASIC, which was specially adapted to the HX-20, also had graphic commands, with which it was possible to display e.g. mathematical functions graphically.

The potential customers for this handy device were therefore business customers and commercial travelers who needed a device that was easy to transport. The device was very robustly built and came in a plastic case, where there was also room for spare cassettes or a spare paper roll. The micro-cassette drive could be removed with a flick of the wrist by loosening a slide switch and replaced with a ROM module, for example, on which business software was stored.

The HX-20 then had two successors, the PX-4 and PX-8, both of which had CP/M operating systems and a Z80 processor, making them even more flexible in software selection.

A weak point of the otherwise very stable devices is the battery: It is a permanently installed 1600 mAh NiCd battery that is charged via an external unregulated power supply. Problem: While the battery is charging, you can’t work with the HX-20 at the same time! You also have to know that the original power supply delivers 9.3V at 600 mA in “no load” and then about 7.2V and 150 mA under load (see also here: http://oldcomputer.info/8bit/hx20/index.htm). This is very important to know when charging the internal battery, otherwise you could destroy it!

One idea to get around this problem would be to lead the power connection for the battery to the outside and supply the HX-20 with conventional AA cells. Advantage: The batteries could be charged independently of the HX-20 and one could continue working with other batteries in parallel.