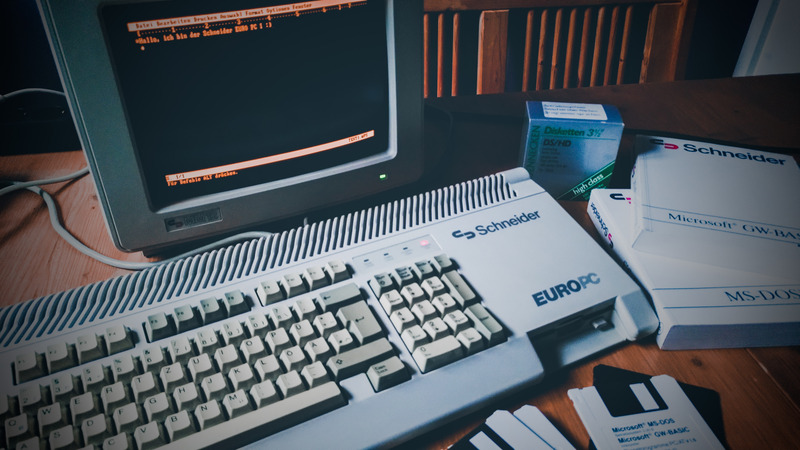 Nostalgic feelings come up! After almost 30 years, I hold a EURO PC in my hands again and type the DOS commands from back then as if it were a matter of course. The Schneider Computer was my first own PC. It was the affordable version of an IBM compatible computer for home use or the small office. It was also very compact, because the whole computer including the floppy drive was housed in the keyboard case. The external power supply could be placed under the desk and together with the 12″ monochrome monitor the computer did not take up as much space on the desk as comparable computers.

Today, these models have become very rare and accordingly expensive to buy on Ebay. All the more pleased to have got hold of a really nice device.

The Schneider Euro PC is an IBM compatible XT with 8088 CPU from Siemens with switchable clock frequency (4.77 – 9.54 MHz), 512kB RAM (Kilobyte not Megabyte :)) and a built-in 720 kB 3.5″ floppy disk drive. In 1988, the Euro PC was the first model developed by Schneider – after the separation from Amstrad – in Türkheim, Bavaria, in cooperation with Commodore. In the basic configuration, the device had no hard disk! But this could be retrofitted externally. Schneider offered the HD20 model, an IDE/ATA compatible hard disk with 20 MB of storage space, which was connected to the special connector on the back. The Euro PC can then also boot from the hard disk.

Besides the “Harddisk” port, the base unit also has a connector for an external floppy drive, as well as connectors for mouse, serial (9 pin each) and printer (Centronics/parallel). The monitor port is also a 9 pin connector for connecting a CGA color or Hercules monochrome monitor.

The graphics card has a video memory of 64kB and knows two modes: Hercules (monochrome, 720 × 348) and CGA (320 × 200, 4 colors, 16 colors or 640 × 200, 2 colors, 4 colors), which can be used depending on the type of monitor connected. With the Euro PC, you are not dependent on original Schneider monitors, as was the case with the Amstrad models PC1512 or PC1640, for example, but can connect any compatible CGA/Hercules monitor. The computer and the monitor each have their own power supply.

The computer can be expanded with a VGA card or a network card, for example, via a short 8-bit expansion slot that can be reached via a flap on the right. Unfortunately, there is only this one slot due to the compact design.

The operating system MS-DOS 3.3 and Microsoft Works 1.05 including extensive manuals were included in the delivery state at that time. Works was the inexpensive version of the professional office programs Word, Excel, Powerpoint etc.. It was developed by Microsoft in the style of Apple Works and offered so a favorable entrance into the Office world. However, development was later discontinued due to lack of demand and MS Office was offered in cheaper editions instead.

MS Works, on the other hand, was often delivered together with the hardware in a package. This provided the user with a simple word processor, spreadsheet, database and data transfer program (RDT). Yes, you read correctly: There was also a dial-up program that could be used to transfer data to other computers via modem over the telephone line. As you know, there was no internet at that time and therefore data transfer had to be done logically via telephone line point-to-point.

The Schneider Computer Division was a subsidiary of the German Schneider Rundfunkwerke AG. In the beginning, it had a cooperation with the British computer company Amstrad for some years and distributed its computers with its own label – these were e.g. the 8-bit home computers Schneider/Amstrad CPC-464,-664 and 6128 in the beginning and later also the IBM compatible computers PC1512/1640 or Joyce. Schneider’s own innovation was the development of hardware settings via software without any jumpers.

Following the example of the 8-bit “keyboard computers”, Schneider then developed the Euro PC in the same compact design from 1988. The Euro PC was followed by the Euro PC II and several other IBM compatible computers (286/386/486), which had either compact desktop cases, mini-towers or large tower cases. In 2002, the era of the German computer manufacturer unfortunately came to an end and the company filed for insolvency.

A typical problem of the Euro PC I/II after so many years is the empty or even leaked setup/BIOS battery. I had to replace it on my device as well. Fortunately, the NiCd battery had not leaked yet on mine, but just showed barely any voltage. Unfortunately, the battery is permanently soldered to the motherboard and is hard to come by in this form these days. Looking for a solution to my problem, I quickly found what I was looking for on forum64.de. There the battery problem was discussed extensively and several solutions were shown.

The following description is of course without guarantee and the reproduction is at your own risk!

I ended up replacing the battery with a button cell holder for a CR3032 button cell, as is common on most PC mainboards today. The exchange was relatively easy. First it is necessary to desolder the old battery at the three tabs. The button cell holder, which should have a pin spacing of 20mm, then fits exactly (slightly twisted) into one of the two plus and into the minus pole.

Unfortunately, the resistor R16 directly next to the battery, which is connected in series with the diode D3 and was there to limit the charging current for the NiCd battery, interferes during installation. Since the charging function for the button cell should be interrupted, it can also be desoldered. I had to solder the resistor later on the bottom side of the motherboard at the same place (see picture). In the forum it was reported that the resistor would be superfluous by using a normal button cell. With me, however, the monitor (MM12) then only beeped after switching on the Euro PC and no longer showed a picture.

Diode D3, which is also located directly next to the battery and the desoldered resistor, must be removed in any case because this interrupts the charging function. Otherwise, the charging current would destroy the button cell.

If the soldering work was successful, the Schneider Euro PC will announce itself with wild beeps after switching on, but hopefully also with a picture (see pictures). Now you only have to reset all BIOS settings: by pressing Alt-Ctrl-ESC you get into the BIOS setup where you can make all necessary settings.

On the picture on the right you can see the old desoldered battery and the removed diode.

After that, the Euro PC works stably again and also keeps the date and time again after switching off.