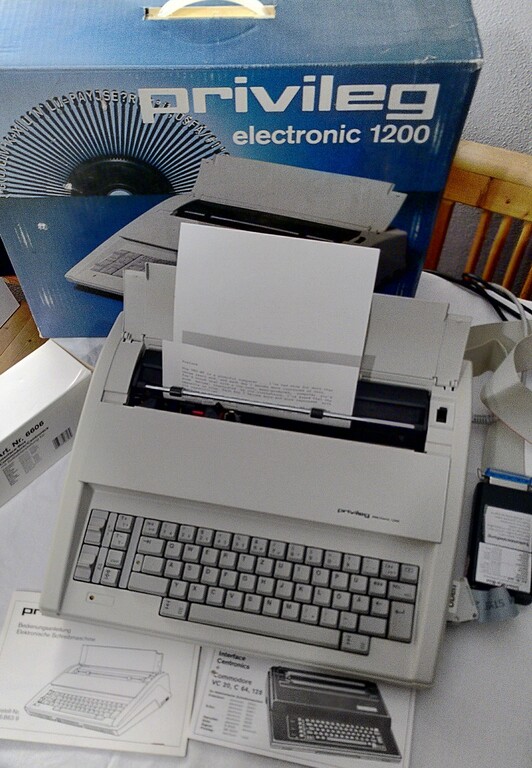 At the time when dot-matrix printers were still predominant, i.e. until the 1990s, it was difficult to get a proper straight-line printer for affordable money. Laser printers were often too expensive for private households at that time, and dot-matrix printers had just this typical print image, which was not acceptable for a thesis, for example. The situation did not improve until the mid-90s, when inkjet printers became cheaper and cheaper and their typeface improved. But see yourself the Privileg electronic 1200 daisy wheel typewriter with printer interface in action on the Tandy TRS-80.

From the end of the 80s, however, electronic typewriters became more and more popular and cheaper. I myself learned to type with the 10-finger system in the mid-80s, initially on a mechanical typewriter. I still remember the rhythm of the hard strokes of 30 students in a classroom. In the very second year, however, we switched to the electric ones. These were, for example, the wine-red ballpoint machines from IBM with a butter-soft stroke. But these typewriters were still very large and heavy. Another year later, our school had already converted a typewriter room to electronic typewriters with internal memory from Olympia – that was in 1986/87.

As a result of this technical “quantum leap,” more and more manufacturers entered the market with new models, and the machines quickly became more compact and less expensive. Soon, electric or even mechanical typewriters were no longer an issue.

Also my “Privileg electronic 1200” already belongs to the compact and inexpensive electronic typewriters and was sold from approx. 1987 over the Quelle mail order company in Fürth. These machines of the Quelle own brand “Privileg” were manufactured by order in the former GDR at the VEB Kombinat Robotron Optima Büromaschinenwerk Erfurt and sold in the GDR under the brand name Erika S3004. The highlight of the machine is its expandability by an external interface box, which allows to use the typewriter also as an EPSON compatible ASCII printer. My expansion box has two connectors for this purpose: Centronics for connection to the parallel port on a PC and the round IEC serial port for the Commodore C64/128. It also has 2 kB of buffer memory. So this typewriter is extremely flexible and can be used together with a word processor as a calligraphy printer. In the Quelle catalog at that time, it was advertised as “modern technology with high writing comfort” and cost 498 DM without interface at that time.

But what should I talk a lot about – have a look at the machine itself in action. For this purpose I made a small video where I print a small sample text with the Tandy TRS-80 and LazyWriter. I use the EPSON FX printer driver and the interface box is connected to the parallel port of the computer. But see for yourself 😉

Here are a few impressions of the typewriter with interface box: